WHIDBEY ISLAND HORN CLUB
The Whidbey Island Horn Club (WIHC) was started in June of 2016 by Sean A. Brown, who serves as the director, leader & organizer of the group. The goal that Sean has with the group is to gather local horn players of all ages to play in an ensemble together, talk about music and the horn, and prepare performances for the Whidbey Island community, with little to no expense to the members.

The WIHC is a non-profit group that is free for members to join. The mission statement of the WIHC is to perform at a high level for the Whidbey Island community and inspire young musicians to play music, particularly the horn. We want to establish a good musical presence on the Island, and hopefully take out performances on the road. Since we try to keep expenses for the members to a minimum (or nothing), we are always looking for ways to raise money for the group (which we put into a special bank account) and are always accepting donations.

The WIHC generally meets for two hours once every two weeks. We spend a majority of the time rehearsing, but time is also spent talking about future performances, promoting the ensemble, and various other horn-related things. Sean usually conducts and leads the group, but he occasionally likes to have other members conduct and lead certain pieces of a program. Sometimes if the group is playing quartets there will be no conductor at all! 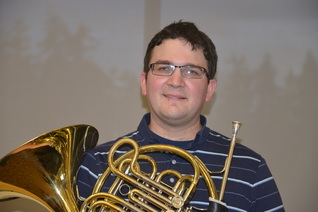 Sean A. Brown (director) is a free-lance performer, teacher & composer residing on Whidbey Island. He is a native of the Island, graduating from Coupeville High School in 2004. He holds a Bachelor's degree from Central Washington University and a Master's Degree from the University of Wisconsin-Milwaukee, both in Horn Performance. He runs a large and continuously-growing teaching studio out of Click Music Store in Oak Harbor, teaching individual lessons to all brass players of all ages, as well as directing his own Harbor Brass Choir.

Sean is also an active performer. He plays principal horn with the Saratoga Orchestra of Whidbey Island, and other chamber concerts with local musicians. He also give solo recitals with pianist Sheila Weidendorf. He has a vast amount of orchestral performing experience, performing with numerous orchestras in Eastern Washington and Milwaukee, Wisconsin.

As a composer, Sean has completed 23 original works and over 25 arrangements. The WIHC often plays his compositions and arrangements, and he's always working to write more for the group. More information about him and his pieces can be found on seanbrownmusic.weebly.com.

Sean started playing music in 5th grade on tenor sax at Coupeville Middle School. After playing sax all through middle school and into high school, he developed a love for orchestral music; thus, he learned to play clarinet, and played the bass clarinet in band. During his 11th grade year, he got a chance to play the horn and take one home to practice, and he couldn't stoping playing it! He put the woodwind instruments aside after high school and learned other brass instruments, while primarily playing horn. 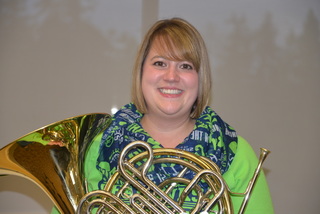 ​Holly Brown is the general music teacher at Broadview Elementary in Oak Harbor, where she teaches Kindergarten through 4th grade music. She is passionate about her work and attends workshops on subjects to expand her teaching repertoire. She is a native of Granite Falls, WA where she graduate in 2006. She holds a Bachelor's degree in Music Education from Central Washington University, and is currently finishing her Master's degree in Music Education with a focus on Children's Literature in the Elementary Music Classroom from the University of Wisconsin Milwaukee.

Holly has a good deal of orchestral & chamber playing experience. From 2008-2012 she played 2nd and 4th horn with ensembles in the Tri-Cities.  She hopes to become more involved with orchestral and chamber music in the Pacific Northwest.

Holly started her musical career playing trumpet in 5th grade at Monte Cristo Elementary. In 7th grade she tried out other brass instruments, such as the baritone and horn, and eventually settled on horn, while still playing trumpet for jazz & marching band. She was also the drum major of the Granite Falls High School Band in 2004-2005. Although horn is her primary instrument, she still regularly plays the trumpet/cornet at church every Sunday.

Holly is the spouse of WIHC director Sean Brown, and together they have three sons.

She plays on a yellow-brass Conn 8D. 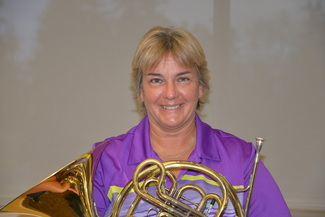 ​Sherri Brown is a lead paramedic for Whidbey General Hospital and volunteer lieutenant for North Whidbey Fire & Rescue. She has been a paramedic for 29 years, and has been helping train new firefighters and EMTs for nearly all of that time.

Although her horn-playing experience is limited, she was a very active trumpeter at Coupeville middle & high school, working hard and practicing lots to earn honors in music throughout high school. She was determined to pursue a career in music before becoming interested in studying medicine. However, after graduation her trumpet spent its time in its case as her medical career and family occupied her life. Although she had a little experience playing horn in high school, she started playing horn primarily in August of 2016, and has received a lot of assistance, training and encouragement from her son and WIHC director, Sean Brown.

She currently plays a Conn 10D. 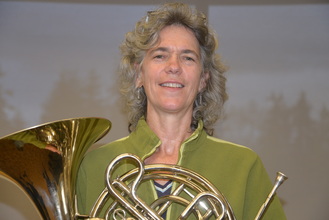 Colleen Childs is a Home Health P.T. living in Freeland, WA. She is active in the South Whidbey music scene as well as in Seattle, playing with the Whidbey Island Community Orchestra, the Seattle Symphonic Band, and in other chamber groups as needed. She has been a music lover all of her life despite not playing music all of her life.

She started playing trumpet in 5th grade in Everett, WA, which she played all through high school. She also had an interest in percussion, which she supplemented to her music activities when she had the chance. After high school and moving away from Puget Sound, she put away the trumpet but still played music on occasion, attending jam sessions on harmonica, percussion, guitar, and at times on her trumpet. After moving back to Puget Sound, local inspiration sparked interest in trumpet, and she joined the Whidbey Island Community Orchestra, where hornists were needed more that trumpeters. Thus, a new horn player was created, which she has played for 7 years.

She currently plays on a Elkhart Conn 8D. 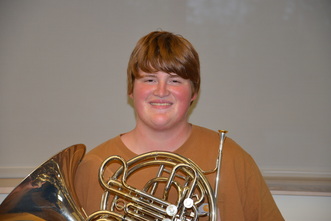 Alec Chinnery is currently a student at the Seattle Maritime Academy. He is a recent graduate of South Whidbey High School, being a member of the trumpet section of the award-winning South Whidbey Jazz Ensemble and playing horn in the Concert Band. Outside of his sailing duties, he is a regular substitute horn for the Saratoga Orchestra of Whidbey Island and 3rd hornist of the Seattle Symphonic Band. Once finished with maritime school, he plans to attend music school. He took lessons from Mr. Brown from 2015-2017. 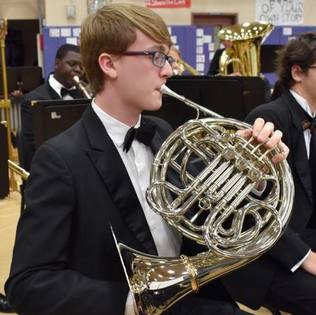 Spencer Lien is one of the high-school members of the WIHC, a sophomore at Oak Harbor High School. He is a multi-instrumentalist, starting on guitar in kindergarten, clarinet in 5th grade, piano in 7th grade, and horn in 8th grade, although horn is his primary instrument. He is a member of the Clarinet Choir at Click Music, which is an exclusive advanced ensemble.

Spencer is very interested in music and excited to further his experience and career in music. He has been taking lessons with WIHC director Sean Brown since October of 2015.

​Spencer plays on a Conn 8D. 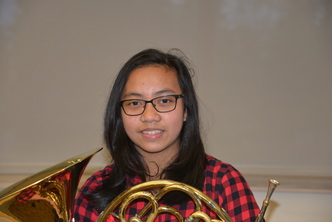 ​Noelle Pangilinan is one of the high-school members of the WIHC, a sophomore at Oak Harbor High School. She started as a trombonist at Oak Harbor Middle School in 5th grade, and started playing horn during her 8th grade year on the side while still playing trombone in band. Horn has now become her primary instrument, which she plays in the WIHC and the Penn Cove Brass Ensemble.

Noelle is very committed to playing the horn and is welcome to new opportunities to play the horn and learn. She currently takes lessons with WIHC director Sean Brown. When not in school or playing music, she plays on the high school softball team and is a soccer referee for elementary & middle school soccer teams.

​She currently plays on a Conn 11D. 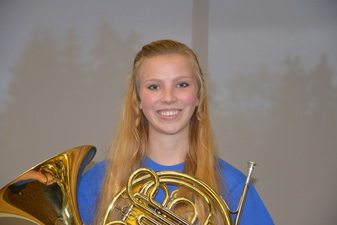 Allison Wenzel is one of the high-school members of the WIHC, a senior at Coupeville High School. She started playing horn as her first instrument in 6th grade, and is becoming proficient on trumpet, trombone and tuba. She is very active in the Coupeville HS music program, playing in the concert band, pep band and marching band, and serving as a student conductor and teacher for the middle school students. Outside of the music programs she is a 4.0 student and vice-president of the junior class, and plays on the volleyball, basketball and track teams. Outside of school she is a member of the Big Brothers/Big Sisters of Whidbey Island, as well as Leo's Club.

Allison is very committed and passionate about music and has been accepted to Central Washington University to study Music Education. She currently takes lessons with WIHC director Sean Brown.

She currently plays on a Yamaha 871D Custom.